Pentobarbital is a tranquilizer that is often used as a euthanizing agent to put down sick or fatally injured animals.

A consumer-level product recall has not been initiated. As of Wednesday afternoon neither Smucker nor any government agencies had revealed whether any of the implicated dog food made it to retail shelves where the public has access to buy it.

Smucker’s spokesperson provided Food Safety News a list of the recalled dog food, which it has requested retailers remove from their warehouses. The list of recalled dog food provided by Smucker is as follows:

The contamination was detected during the course of a study commissioned by WJLA, a Washington D.C. area station, according to a spokesperson from the Clean Label Project, which conducted the study for the news station. Gravy Train was the only brand of pet food included in the study that was found to contain pentobarbital. 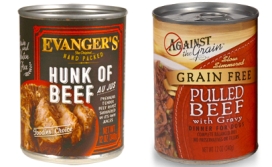 The study was undertaken in response to the 2017 discovery of pentobarbital in brands of canned/wet dog food manufactured by Evanger’s Dog & Cat Food Co. Inc., an adulteration that resulted in illnesses of several pets and at least one death.

The samples were analyzed to determine both the presence and the amount of pentobarbital in the dog foods, using test methods consistent with FDA protocols. According to Smucker, the amounts of pentobarbital found in their product “…do not pose a threat to pet safety.”

An FDA spokesperson told Food Safety News that the agency’s “…preliminary evaluation of the testing results of Gravy Train samples indicates that the low level of pentobarbital present in the withdrawn products is unlikely to pose a health risk to pets.

“However, pentobarbital should never be present in pet food and products containing any amount of pentobarbital are considered to be adulterated,” said the FDA spokesperson.

All of the products included on Smucker’s retailer recall list came from the same manufacturing facility. The company has narrowed its investigation to “…a single supplier and a single, minor ingredient…” used at that facility.

Jaclyn Bowen, the executive director of Clean Label Project expressed a lack of surprise at the pentobarbital findings.

“At Clean Label Project, we believe that sometimes what’s not on the label is what’s most important,” she said.

“Clean Label Project’s 2017 Pet Food Study revealed high levels of heavy metals, BPA, and acrylamide in some of the nation’s best selling pet food. The presence of pentobarbital in Gravy Train does not come as a surprise and the Evanger’s recall was not a one-off, rather the tip of the iceberg of an industry that needs to significantly improve its food safety and quality through testing.”

Smucker encourages pet owners with questions or concerns about this situation to contact the company by telephone 800-828-9980 or via email at: http://www.bigheartpet.com/Contact/ContactUs.aspx.

This story first appeared on Food Safety News and is reposted here with permission.

For complete eFoodAlert archives prior to Jan. 1, 2011, visit eFoodAlert.blogspot.com.